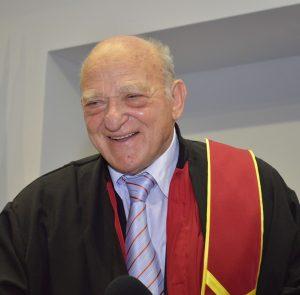 Titu Maiorescu University of Bucharest expresses its grief and deep regret for the departure of Dr. AUREL VAINER, the honorary president of the Federation of Jewish Communities in Romania.

Dr. AUREL VAINER was a great personality of our times, a spirited person who dedicated a large part of his life and activity to the cause of understanding and brining harmony to people, based on the values ​​that unite us, beyond our differences. For 15 years, between 2005 and 2020, he was the president of the Federation of Jewish Communities in Romania, then he became the honorary president of FCER. Wise and visionary, enjoying prestige and authority, he was a promoter of human values, of dialogue between communities and denominations, of peace and understanding at social levels, as well as a promoter of respect and tolerance. In this sense, an event initiated by AUREL VAINER, PHD, called Bridges of Tolerance, and held annually by the FCER has become emblematic for his vision of the world and the common existence under the auspices of respect for others. He advocated, through his attitude, positions, interventions from the Tribune of the Parliament, public speeches, communications in scientific, cultural or civic events, for reason, lucidity and balance, against extremism and derailing, for common values, for respect, solidarity, peaceful and harmonious coexistence. AUREL VAINER, PHD was a great personality of our day, a good man and a noble spirit, who spread light around him.

Considering the value of his professional, academic and scientific activity, his exceptional contribution to the promotion of human values, respect, peace and understanding, on May 7, 2015, Titu Maiorescu University of Bucharest awarded AUREL VAINER, PHD the academic title of DOCTOR HONORIS CAUSA in an event that has remained in our memory. In the aftermath of the event, the University and the Federation of Jewish Communities in Romania organized in the same year, in December, an exceptional event dedicated to unity in diversity, the “Light that unites us” Festival.

Through the departure of Dr. AUREL VAINER, the Romanian society loses a great personality, a spirit of high human nobility, a wise man and a chosen man, with a vocation for peace and love. Inconsolable, the academic community of Titu Maiorescu University is losing an elite member.

We extend our condolences and full sympathy to the grieving family and the Federation of Jewish Communities in Romania! We pray to God to place the departed among His Righteous, in  eternal Light!